At Lödige Industries, Robert Lukoschek will with immediate effect be responsible for sales management in Berlin.

Overpriced, cumbersome, unattractive – these are the adjectives that come to many people's minds when it comes to home lifts. A manufacturer of home lifts wants to dispel these prejudices.

Today, people in every walk of life and sector are talking about digitalisation. This also encompasses lift emergency calling.

ArcelorMittal honours partner companies with outstanding occupational safety standards with its Safety Award. Originally planned for 2020, the award was made later due to the pandemic.

“Those who can deliver make deals whatever the price”

No sooner has the Corona crisis possibly been overcome than there is another crisis for companies to overcome: the lift sector is also struggling mightily with material shortages and raw material and component prices, which in part are going through the roof.

More expensive, later, less available" - this is how an article in the German business magazine "Handelsblatt" summarised the situation at the end of June. There were shortages along the entire supply chain, according to the article. "Plenty to do, but no material: working life in the new shortage economy is occasionally reminiscent of the absurd conditions in the late GDR."

Many sectors are affected – also the lift sector – across Europe, according to Björn Kollmorgen, deputy director of the VDMA Trade Association Lifts and Escalators. "We’re getting reports from across the board that manufacturers are battling the same problems."

For many companies, the shortages are currently still manageable. They filled their warehouses proactively at the beginning of the Corona crisis. This is also true of the Cologne-based company, Kollmorgen Steuerungstechnik. "Admittedly, as an SME, we are not in the same boat as big companies and traditionally maintain stocks to enable us to overcome lengthy shortages. But we can’t accumulate endless stockpiles either."

The shortages and price increases are not just restricted to well-known shortages such as steel or wood. Electronic components were also affected, especially semiconductors and processor modules along with subcontractor products made of PVC and other plastics, such as lines and terminals, according to Björn Kollmorgen. "Apart from the actual shortages, prices are surging in every area. We hope the situation will ease in spring 2022."

Other components manufacturers are also struggling with similar price increases. "We used to pay 600 to 700 euros for sheet metal – now it’s 2,400 euros," noted Wolfgang Nothaft, managing director of Meiller Aufzugstüren. Stainless steel prices had doubled; galvanised steel cost 600 euros a ton a year ago, now it was 1,400 euros. Meiller benefited from long-term agreements with its suppliers, but price increases still had to be passed on to customers.

On top of this, getting hold of material at all was a problem. "You can build up stockpiles, but with other products we’re living from hand to mouth. Those who can deliver make deals whatever the price." Nothaft was also concerned with regard to the lift sector overall, especially in relation to lift builders. "By Easter 2022, no more sheet metal will be available to buy, many of them don’t know about this. At the moment, the sheet metal sector is gouging everyone." Very few companies had price escalation clauses, in Nothaft’s view.

"No one ever needed one, this will be fatal for many in about half-a-year. This is because the lift will then cost manufacturers far more than 18 months ago when they made the contracts." 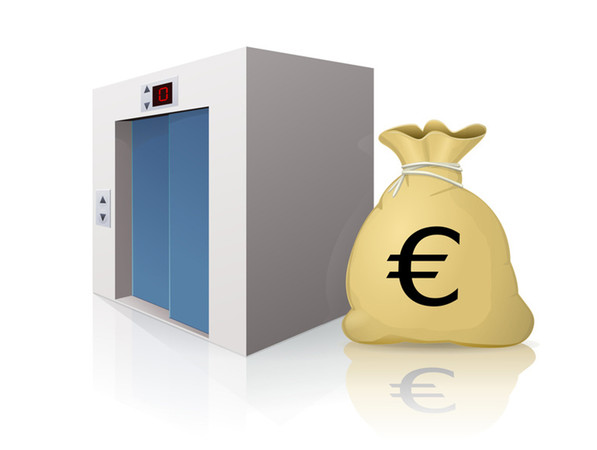 Ralph Hübschmann was familiar with these problems. "All of the suppliers have raised their prices," reported the managing director of the lift manufacturer "Hübschmann Aufzüge". The price increases ranged from thee to 200 percent. Happily, they had made large purchases at the end of 2020. "Thank God, we’re still in a good position, because we managed things well. But it’s really no joke. There’s more work and the margins are lower."

In the meantime, he no longer made any offers without a price escalation clause. "That used to be an exception among lift builders, but now it’s naturally increasing." He could no longer give his customers any discounts, Hübschmann added. "That’s difficult for everyone, of course. But many know what the situation's like just now."

The lift builder Raloe also had to cope with bottlenecks regarding many materials and components, reported Jorge Linares, the company’s export manager, whose headquarters are in Valencia (Spain).

Thanks to cooperation with many "first class suppliers, who have capacity and medium-term supply planning, we have, however, been able to continue to offer our customers completely normal and regular service." But of course, Raloe was also having to cope with the fact that costs for raw materials and sea containers "were systematically increasing to an unparalleled extent," explained Linares.

But at the same time, Raloe relied on transparency vis-à-vis its customers in order to explain the necessity for price increases. "Raloe sets great store on communicating very transparently and clearly with its customers about the margins the sector operates on. They don’t permit absorbing increases at any point along the supply chain. They have to arrive at the end of the value added chain, in this case with the end customer."

Surveys taken by the German sector associations also confirmed the assessments of these lift companies. For example, the survey made worldwide by the VFA-Interlift together with the trade fair organiser AFAG and the Elevator World magazine.

According to this material and equipment bottlenecks became the most important limiting factor, overtaking "economic uncertainty" for the first time in the current survey, with more than 50 percent of respondents now citing this as a limiting factor in July/August 2021, up from 30 percent in April and 17 percent in January.

And the lift index of the VDMA Trade Association Lifts and Escalators in June revealed that material shortages and the associated supply bottlenecks were becoming apparent above all in expectations. In the preceding three months, these revealed a clear downward trend and were responsible for the deterioration of the business climate.

Recovery of the industry at risk?

The fact that the lift sector is not the only one affected is no consolation. Shortages of primary products had become a serious problem for all of German industry, according to an ifo Institut survey: 45 percent of the industrial companies surveyed in April reported bottlenecks.

This was by far the highest result since January 1991. In January 2021 this had been 18.1 percent, in October 2020 only 7.5 percent. "This new bottleneck could endanger industry’s recovery," revealed Klaus Wohlrabe, head of the ifo surveys.

"At the same time, many of our customers are also facing the same bottlenecks on their building sites. This is contributing to later completions and as a result making it increasingly difficult for clients and contractors to make plans," explained Schmitt, who has been the new chairman of the Lift and Escalators Trade Association in the VDMA for several months. "Consequently, the bottlenecks are affecting both ends of the supply chain in our sector."

More information: "Capacity utilisation in the sector is still high. But the supply bottlenecks have increasing numbers of companies worried. The soaring raw material prices are a burden on the sector. In recent months, the prices for sawn timber have almost exploded. The sawmills can scarcely keep up. Steel has also got a lot more expensive. According to sector reports, insulating materials and various plastics are scarce too."
Felix Leiss, survey expert at the ifo Institut

Level up: The LIFTjournal as digital paper

We move with the times: Parallel to the printed editions, you can now also read the LIFTjournal as a digital paper. Unlike a PDF, you can conveniently click and open every article here.

“We’ve been in crisis mode for over a year”

The postponement of the interlift has caused quite a stir. LIFTjournal talked to Henning Könicke, the managing director of the interlift organiser AFAG, about the background to this and the reactions of the industry.

interlift 22: Over 80 percent of the space is already occupied

Well over 300 elevator companies have now registered for interlift, and a good 80 percent of the available space has been booked. This is reported by the interlift trade fair organizer AFAG. There will be a kind of digital preview at the originally planned date in October 2021.

New technologies on the way to series production

Raloe is currently deploying several new technologies at once They are expected to offer numerous advantages for elevator manufacturers and operators.