In 2022, the Kübler Group is once again one of the 100 most innovative medium-sized companies in Germany for the fourth time in a row according to WirtschaftsWoche.

“Technical harmonisation has many advantages for all concerned. For example, it offers cost reductions throughout the entire supply chain …” emphasised Esfandiar Gharibaan in an exclusive interview with the LIFTjournal.

The life cycle of lift doors

The environmental effects of goods can be determined with a life cycle analysis. This is of course also possible in the case of lift doors.

The lift industry and sanctions on Russia and Belarus

ELA stands united in solidarity with Ukraine and supports the EU sanctions against Russia and Belarus. As an EU-based organisations, the ELA also has a compliance responsibility, in particular under the new horizontal services prohibition.

ELA has a due diligence obligation when engaging in its activities to ensure that its operations directly or indirectly (through a member with activities in Russia or Belarus) do not infringe the EU sanctions regime. Members of ELA must therefore ensure their own compliance with the sanctions. 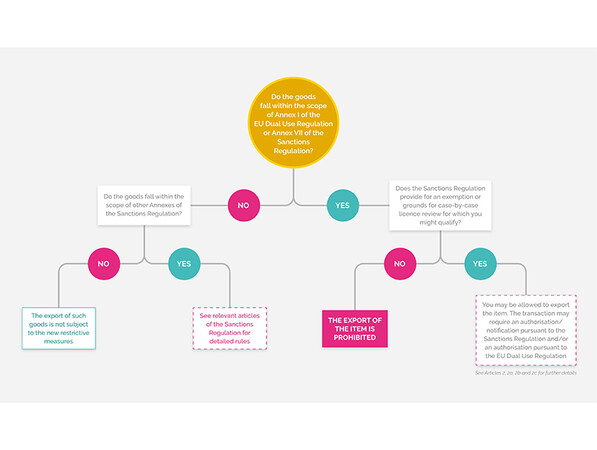 The simplified process for verifying whether you are affected by export restrictions. Photo: © ELA

In response to Russia’s recognition of the Donetsk and Luhansk regions of Ukraine on 22 February 2022 and its continuing military aggression against Ukraine which began on 23 February 2022, the European Union (EU) has adopted sanctions severely restricting economic relations with Russia, Russian entities, and Russian citizens.

A number of packages of regulations implementing the sanction decisions have been unanimously adopted by the Council and published in the Official Journal. In this article, we provide a short overview of these measures as a guidance for the lift industry and highlight how persons and legal entities under EU jurisdiction can access further support and advice.

Since the military aggression against Ukraine unfolded and intensified, senior Russian military officers accused of war crimes have been named, banks have been excluded from the global SWIFT payment network, and radio communications towards the European Union (whether by cable, satellite or Internet) have also been restricted. Coal was also addressed in the last sanctions package, and now a complete import ban has been imposed on all Russian seaborne crude oil and petroleum products, subject to certain transition periods to allow the sector and global markets to adapt.

A tougher regime of EU sanctions

On 4 May 2022, the European Commission presented its sixth sanctions package against Russia. This package also imposes further sanctions against Belarus. Together with the previous five packages, the sanctions are designed to further increase economic pressure on Russia and undermine its ability to wage its war on Ukraine.

Among those sanctioned are top Russian political representatives, oligarchs, military personnel and propagandists. Targeted sanctions now apply to 1,158 individuals, including over 30 oligarchs. 98 Russian entities and 25 Belarussian entities are also subject to restrictions.

The broader sanctions will also halt public financing and financial assistance for trade with or investment support in Russia, including national export support. In addition, some of the sanctions are designed to impact Russia’s access to advanced technologies. 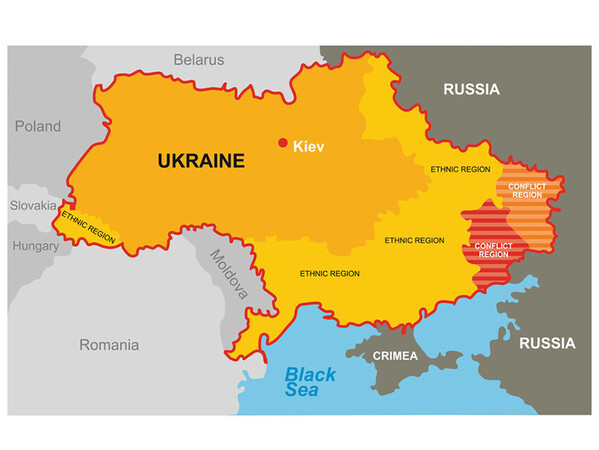 The Commission has, in this respect, provided a simplified process chart on page 3 of its FAQs document pictured below.

Annex 1 of the Regulation lists these items in more detail, including certain types of advanced electronics, semiconductors, drones, software, computers, telecommunications equipment and sensors and lasers.

The EU’s commitment to rebuilding Ukraine 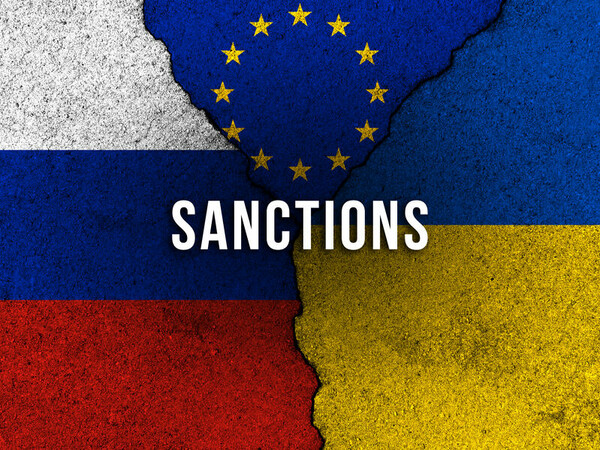 While sanctions are being tightened, initial thoughts are already being given to immediate post-war and reconstruction assistance: short-term economic support and suspension, for at least a year, of all duties on Ukrainian exports to the EU.

After the devastation wreaked upon Ukrainian towns and cities, especially in the eastern regions, the Ukrainian GDP is expected to shrink by 30-50% this year alone. The International Monetary Fund estimates that Ukraine already needs EUR 5 billion a month simply to run the country, pay pensions, salaries, and basic services.

After the war, there will be a huge and costly reconstruction period, which economists estimate could run to several hundred billion Euros. Europe is therefore already starting to think about an ambitious recovery package to lay the foundations for long-term sustainable growth, paving the way for Ukraine's future as part of the EU.

The author is Secretary General of the European Lift Association (ELA)

More information: Full details on the entire package of restrictive sanctions can be found at: https://policy.trade.ec.europa.eu/index_en.

The European Commission (DG Trade) has also published a guide with a list of frequently asked questions on the restrictive measures it has taken in response to Russia's actions against Ukraine.

For further questions and support, a dedicated mailbox has been set up for companies by the European Commission: ec-russia-sanctions@ec.europa.eu.

“ELCH” is back in Heilbronn

In 2020, it had to be cancelled due to Corona, but the Technical Akademie Heilbronn has now issued a new invitation: the ninth European Lift Congress (ELCH) on 11 and 12 October in Heilbronn.

Less than four months to go until LEIA’s triennial Liftex 2022 event takes place on 12-13 October 2022 in London, the organiser look at how the event is shaping up so far.

CapMan Buyout has acquired Hydroware, a producer and provider of systems for modernisations of lifts from the company’s founder and other shareholders.