Meiller has expanded the user functions of MiDrive and the app for the diagnosic tool. The remote support tool has been further expanded and now offers additional video and audio recording.

– If the skate is tightened forcefully, it no longer remains - as previously normal - open at this position. As long as the door signal is present, the motor will continually attempt to return to the original position. In this regard, the message “Door manipulated” continues to be displayed. If the skate is closed, this position is now actively held. The motor dynamically counteracts all forces that would result in the position being lost. The skate is held during minimised electricity consumption. 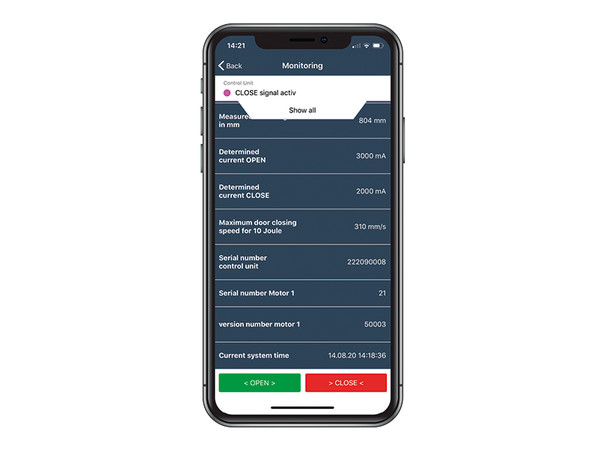 – In the case of mechanically caused problems, door drives normally enter malfunction mode or expect a signal change in order to launch a new travel attempt. Here the MiDrive system independently repeatedly attempts to process the impending order at a two-second rhythm. Only motor overtemperature or another door command now results in cancellation of the travel movement.

– New travel profiles are filed by Meiller under door specifications. Even without a QR code, the door drive can be set to the situation on the spot. The app offers a tutorial with simple questions about generating a QR code.

– Sense opening, i.e. slow door opening, was adopted by Meiller in the CAN standard. As a result, an active FingerGuard sensor, whose function is restricted, can be cautiously overridden or suppressed.

– Active holding of a door position. You can specify via an input that the MiDrive actively holds any position with the set end position current OPEN. A closing weight can then no longer close the door. With enough force, the door can still be moved, but then returns to the original position. In a fire brigade lift, the doors operate using “dead man’s switch”. Since normally the closing weight closes the doors after passengers leave the lift, this function allows the door to remain motionless to ensure the that the fire brigade can also withdraw back to the lift quickly if necessary. (for information purposes: this function meets the standard. Several fire brigades have even decided against the standard and requested the behaviour described above. The MiDrive can of course naturally also be used in compliance with the standard.

Intelligent systems configure start-up, maintenance and inspection more efficiently and in this way contribute to improvement of the overall performance of a lift.

By Wolfgang Nothaft
The author is managing director of Meiller Aufzugtüren

Jörg Nowastowsk-Stock has been the new managing director sales and marketing of Conta-Clip since March this year.

The Munich door specialist Meiller exploited the difficult phase of the Corona pandemic to engage in further development of solutions in the field of doors and tackle and implement ideas for new products.

“Elevate your knowledge” – with the experts of the E2 Forum

Innovation, digitalisation and sustainability – opportunities for buildings of today and tomorrow: the E2 Forum Frankfurt on 21 and 22 September 2022 will offer the latest knowledge on these topics.