Lift technology as a mirror of social change

SME lift companies need to be prepared for increasing digitalisation. Training and further education play a great role here. Lift building simultaneously has to get to grips with other important trends.

Blain has developed a new smart electronic control valve to further improve the travel properties of lifts. At the same time, the associated control board was designed with the fewest components possible.

In December 2020, Lutz Aufzüge put a photovoltaic system on the roof of its production facility into operation.

The concept is restricted to replacing all of the mechanics without changing the existing frame and sill.

The reason why modernising landing doors tends to be avoided is due to the great expenditure of time and material - especially if it involves replacing the door frame. Costs can arise during connection work on existing outer frames, stone- or other door portals and existing floors that can scarcely still be justified.

Apart from the work of lift builders, the work of other building trades, such as bricklayers, stonemasons or painters, etc., is often also required. This in turn has a considerable influence on the temporal project sequence and the total costs of modernisation. On top of this are the inconveniences due to dust and noise for the building's inhabitants. 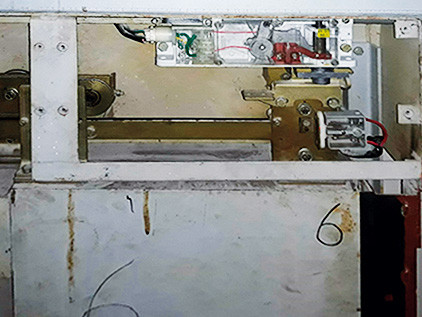 Normally, the existing landing door frame is undamaged and can be optically restored and upgraded, in most cases with a limited amount of work, such as repainting. Normally, only all of the completely outdated and worn-out mechanics needs to be replaced.

Meiller has now developed a new kind of concept that is restricted to replacing all of the mechanics without changing the existing frame and sill.

Technical implementation of this modernisation concept is easy:
• The existing transom is separated from all mechanical and electrical parts.
• The new mechanical unit supplied by Meiller is now placed in the transom at the corresponding depth and height. The door hangings are then connected to the existing door leaves with adapter panels. As a result, the guide rails of the door leaves again run in the existing sill.
• A new closing weight connection and adaptation to the existing emergency unlocking is including in delivery.

A new Meiller car door is needed to operate the new hook bolt; either a new transom with complete drive and mechanics from the MOD kit or a complete car door, each with a standard TM2-V skate.

Johann Schum Aufzugtechnik GmbH has issued a new version of the Marsdesigner, the calculation tool for the Mars product line, with which automated creation of lift drawings is possible.

Meiller has expanded the user functions of MiDrive and the app for the diagnosic tool. The remote support tool has been further expanded and now offers additional video and audio recording.