Schmersal Böhnke + Partner and the Austrian start-up View Elevator have agreed to cooperate in the worldwide distribution of their products for the lift industry.

Too little, too late and too expensive…

Two topics now dominate many discussions: the raw material/material shortage and price increases. LIFTjournal interviewed the deputy chairman of the VFA-Interlift and managing director of the Schaefer Group, Michael Gubisch, about this.

Time is always short on building sites. Schindler Germany hopes to provide genuine added value with a new assembly method, which the company developed in cooperation with Menzel Beton-Bausysteme.

This is because most of the work does not have to be performed on the building site, but has already taken place in advance at the concrete plant.

At first glance, the idea makes sense: if lift shafts are produced as prefabricated concrete parts and can be delivered in individual elements to the building site, why not also install the technology needed in advance, such as guide rails and drive?

"The challenge here is that in civil engineering production precision is measured in centimetres, but in lift technology in millimetres," said Felix Schulte-Herbrüggen in explanation of the problem of differing tolerances. This made the task more demanding than one would initially assume. Schulte-Herbrüggen is the project manager for product innovations and as such played a leading role in realising the "modular lift" concept in a pilot project.

Assemble what belongs together early on 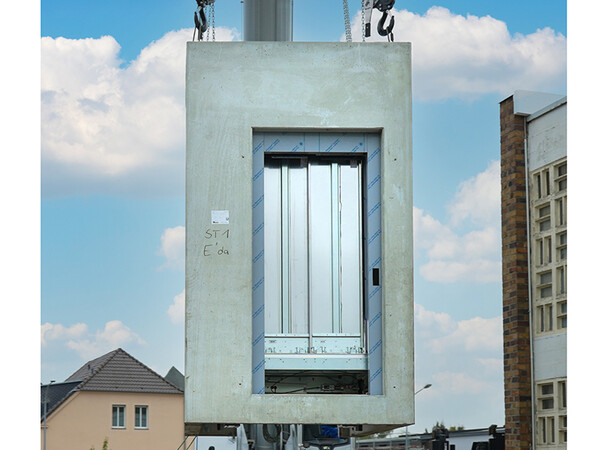 "This is a huge step in the development of the construction industry, which has now been made possible by BIM applications and on the basis of the precision of the planning and production systems," reported Michael Menzel, managing director of the eponymous company, which is specialised in producing prefabricated reinforced concrete parts. "Thanks to the close cooperation between concrete and lift production, elaborate coordination steps, which would have cost time and resources, could already be eliminated for the end customer in the planning phase."

The SME from Großthiemig in Brandenburg and Schindler have been cooperating for several years. As part of the renovation of an existing building in Elsterwerda, this resulted in the opportunity to implement the concept in practice.

"Retrofitting a lift was required for this building, which was being converted to a medical centre. However, the time window for construction of a lift shaft with lift was too short to meet the planned date for occupation," according to Schulte-Herbrüggen.

The hall becomes a building site

Therefore, instead of doing so in the finished shaft on the building site, the Schindler employees assembled the individual concrete elements in the factory hall, which had several advantages. For example, the workplace had a roof, the material and tools were immediately to hand and the assembly could take place on the ground, which was an advantage for work safety.

"The digital advance planning and high design quality of the elements ensured optimal fitting precision, which was confirmed on the building site," explained Schindler. They managed to install the entire lift on the outer wall of the building on the prepared foundation in one day.

For this purpose, the individually pre-assembled partial elements were stacked on top of each other by a crane and connected to each other by specialists. In the shaft itself, only the drive belts had to be installed and the wiring finalised.

Whereas the client previously had to coordinate the shaft and lift construction separately, in future, overall planning for lift and shaft would be centralised, according to the group. This was also an advantage in view of increasingly complex fire protection and noise insulation requirements. Moreover, the impairments and storage areas needed on the building site would be reduced to a minimum.